Monitor, the radio show dedicated to electronic, electroacoustic etc music will be about  the Austrian sound artist Bernhard Leitner.
Åsa Stjerna is the author of the programme. Wednesday 16 June at 21.30 on Swedish Radio P2, and after that for a month in the P2 archive.

Organised Sound: An International Journal of Music and Technology

Audiorama Ars Acustica’s open call adresses the nordic schools of higher education in arts and music composition, with the aim to present four finalist pieces, of which two achieves a commission for a new work, at Audiorama in Stockholm, Sweden in the late 2010:

Alex Nowitz came to EMS between 10/5 and 28/5 as part of the ECPNM prize that he won last year. During this time he worked on an 8 channel composition in studio 2.

If you're curious to know what the new generation of sound artists is up to come to Fylkingen on June 1st at 7 p.m.

I'm making this spare time useful by not making waste

“I can’t hear the sound of your sewing machine anymore” is an ongoing project of Anna Linder's about the invisible work of women. “Sister Drag” was the first part and “I'm making this spare time useful by not making waste” is the second.
This project is a homage to my mother, my grandmother and to all the women who have a bad conscience because they always feel inadequate.
The duration of the event is between 2 p.m. and 7 p.m. After that the installation will be on display until midnight.
A new video will be premiered in the foyer along with "Sister Drag" from 2008.
This exhibition is a result of the graduation work which ends the masters' course in sound art at University College of Film, Radio, Television and Theatre and EMS.
Free entry
Member production: Linder in collaboration with Dramatiska institutet and EMS

At this year's Norbergfestival EMS will be presenting Lars Åkerlund. Other artists that EMS has engaged are Kathy Hinde, Daniel Skoglund, Nadine Byrne and Biosphere.

Buy tickets before the end of June and get a discount! 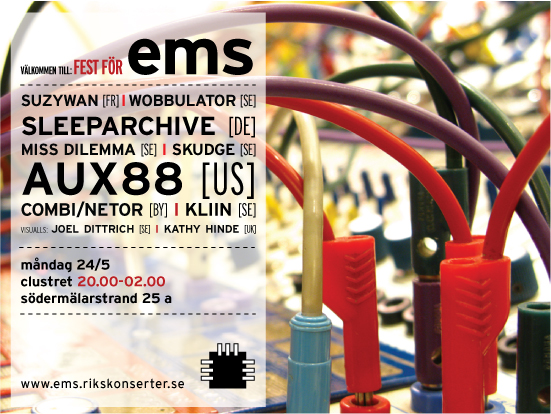 EMS is throwing a big party to celebrate our selves!

If you happen to be in Stockholm and you want to come to this party, please email us your name to .

Free entry for all that have signed up.