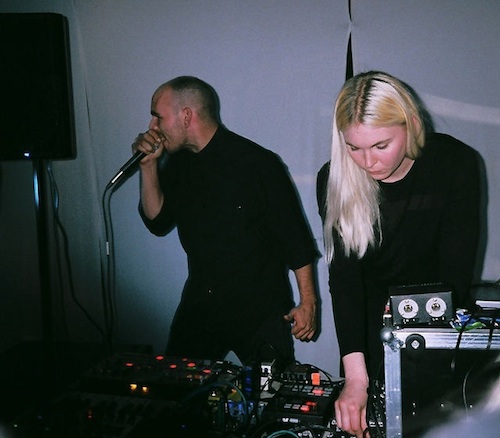 EMS welcomes Frederikke back to EMS, this time with Jesse Sanes!

During this stay at EMS, Frederikke will be working with Jesse on their collaborative noise/industrial project “Fejhed” whose debut recording appeared on Chondritic Sound this spring.

Frederikke Hoffmeier (1989) is a Copenhagen based experimental music composer and performer. Throughout the last four years Frederikke has made a name for herself within fields of modern industrial and experimental music. Despite her young project, the discography is vast with releases on labels like Posh Isolation, Freak Animal and iDEAL Recordings and portrays her work methods to be many and diverse, from sound-art pieces, minimal synth compositions to straightforward industrial music. This year she has performed throughout Europe and America.

Jesse Sanes (1986) is a Los Angeles based writer, curator, artist and musician. Jesse creates noise and industrial music with synthesizers, sequencers and field-recordings. He has recorded and toured extensively throughout the US, Canada and Europe with hardcore punk outfit HOAX (Youth Attack, La Vida En Un Mus) and as curator of the Art//Noise series of performances and installations he has presented work from international artists and experimental musicians including John Weise, Helm, Brendan Fowler (BARR), Wolf Eyes, Pharmakon and more. Jesse is an original member of the W.S.S.F.

An AIR-programme grant from Nordic Culture Point has made it possible for EMS to invite her to work at EMS in 2014.