Morgan Evans-Weiler is a Boston based artist and educator whose work ranges from composition and sound installation to drawing, video and design. Exploring the realms of contingency and environment, Evans-Weiler’s works examine the process of change and the inherent creativity that exists as a precondition of our physical and temporal experience. He uses objects, psychoacoustic phenomena, stasis, stillness and our sense of place as compositional material to explore our environmental experience of space and time. 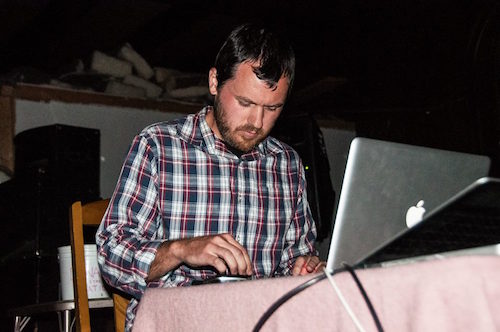 Evans-Weiler maintains a busy performance schedule and has performed throughout the United States. He has collaborated and performed with Seth Cluett, Sarah Hennies, Mike Bullock, Dave Gross, Bhob Rainey, Dafne Vincent-Sandoval and many others. He is director of the New England based ensemble ‘Ordinary Affects’ whom have performed works by Jurg Frey, Magnus Granberg and premiered works by Antoine Beuger. His recent album ‘Violin/Sine’ was called ‘transfixing’ by writer Steve Smith and included in the Boston Globe’s list of ‘Best Local Classical Albums of 2015’.