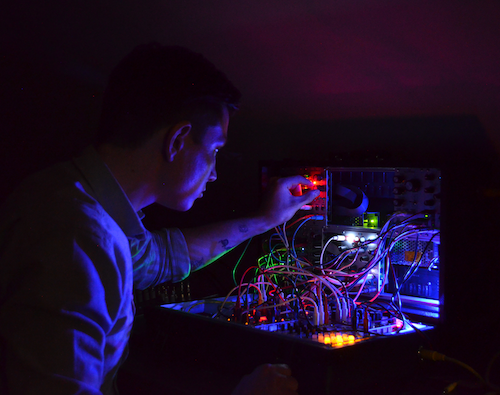 Eric Frye is a composer, artist, and curator. Exploring non-orientable sonic surfaces, Frye operates between the disciplinary boundaries of sound, philosophy, linguistics, and mathematics. His live performances and installations are focused towards a recalibrated layering of multi-channel diffusions. Simultaneously dissociative and palpable, Frye’s compositions activate an interplay between material and immaterial. His latest recording, Some Consequences of Four Incapacities, was released by Portland-based imprint, Salon.

In April 2015, Frye recorded new pieces for multi-channel installation at Harvard University Studio for Electroacoustic Composition. During October and November 2015 Frye’s solo exhibition, a 12-channel electroacoustic diffusion titled Zenzizenzizenzic, was installed at Rochester Art Center in Minnesota. Recently, he has been composing new work in the anechoic chamber at Minneapolis' Orfield Laboratories in addition to collaborating with software designer Sam Wolk.

Currently, he is developing a multisensory performance with researcher Simone Niquille, in addition to preparing material for a full length LP which will include texts by French mathematician Andrée Ehresmann and Colombian philosopher Fernando Zalamea. The next exhibition of Frye’s work will be in September 2016 as part of a group show curated by Tetsuya Yamada. He has forthcoming albums on Cejero, Sympathy Limited, and Anòmia.