ClockDVA are increasingly considered as one of the pre eminent pioneers of 80’s experimental Electronic music. “Adi Newton has long since described the process of making music as his research. It represents a more thoughtful and reflective body of work than that which dominates his peer group. In particular, Newton’s grasp of the philosophical connotations of technology placed him apart from the majority of its practitioners.” NME.COM First For Music News. DVA acclaimed albums include the 1988 electronic masterpiece BURIED DREAMS & the 1980 seminal electro acoustic album THIRST. 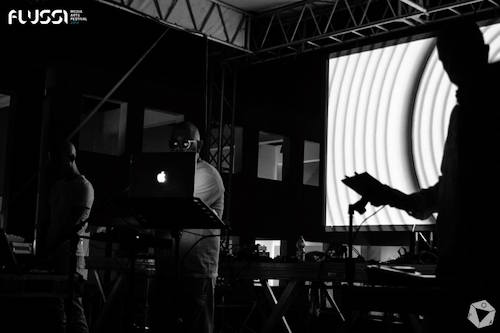 Past or future CLOCKDVA stand on the edge of Now, Continually developing & researching and exploring new ways in which to transmit the spirit and soul that is Behind and beyond technology & technique. Our aim is fundamentally simple but also a complex Desire to connect to the human emotion that is the centre of what we are. Our work is aimed at an individual level for a need to open the possibility of what sound and art can be and in this open new doors to new areas of exploration for ourselves and others.

In the late 70s around 1978/1979 a project like no other orchestrated by Adi Newton came into being and it was called ClockDVA. This project was unlike any other and was so original that it got people’s attention. “My intension was always to go beyond the formats on convention and try to create something new, something outside of orthodoxy to challenge myself, to stretch the frontiers and so l formed ClockDVA after the demise of The Future in 1978 ”.

"Adi Newton is a visionary that surpasses even the normal criteria for industrial music from yesterday and beyond." Culture Asylum Magazine, interview LA 2011.

CDVA can list many albums that have received critical and cult recognition  but we choose to focus on the new and forthcoming works we are releasing and developing through Anterior Research Media Communications. Here you can find a link to our extensive web site which connects to the New & Past works of DVA /TAGC to better understand the progression and development of CDVA.