As a Canadian artist, Jean-François Laporte has been an active member of the contemporary art scene since the mid-1990's. He pursues a hybrid approach integrating visual arts and sound exploration. Taking an intuitive approach to create music, Laporte learns art through concrete experimentation on matter. His unique artistic vision relies on an active listening of each sound, object, material, etc. Thus his art is the result of working in complicity with raw material, proposing constructions born of each material he explores. His work is characterized by a large diversity of sound sources, aesthetic quality concerns, as well as an undeniable peculiarity. 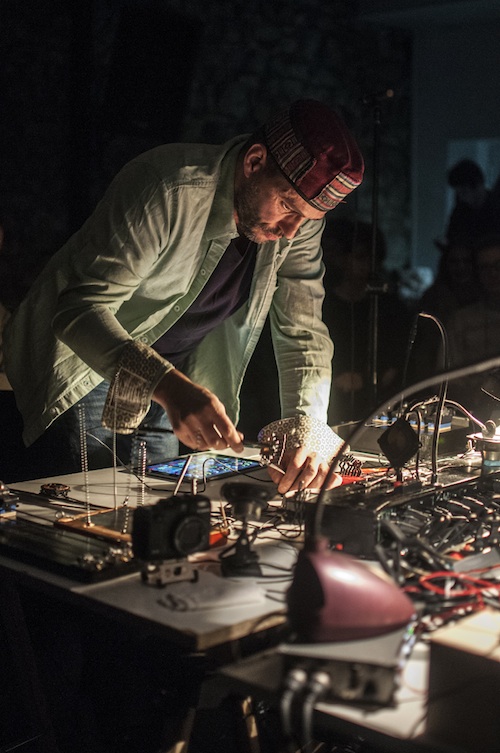 For the past fifteen years, along with his activities as a composer, Jean-François has been developing and making new musical instruments (Tu-Yo, Bowl, FlyingCan, Sax-trunk, vibrating membranes and Siren Organ,) which he integrates in his works and, since 2002, to visual & sound installations using computerized and robotized controls. These inventions have brought the composer to create several commissioned works.

Increasingly, these inventions are drawing attention in the theatrical and visual arts circles. Not only have they been the centerpieces of numerous tours but they have opened up new opportunities in the areas of contemporary music and dance.

Since 2000, while dedicating a lot of energy to invented new musical instruments, visual & sound installations, the composer is still very active in the creation of works for traditional instruments but very often used in a non- traditional manner.

The composer is a PhD candidate at the University of Huddersfield (UK) with Pierre Alexandre Tremblay. The musical works of Jean-François Laporte are edited on Babel Scores Edition, (contemporary Music online).