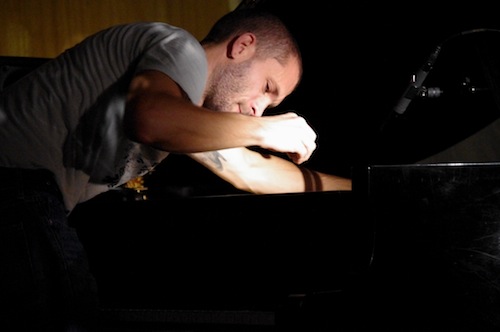 In that particularly caustic summer, the so-called ‘Movement of 1977’, non-aligned, without any ties to the Parliament and non-violent, broke into the scene of prevalent conspiracy-steeped paranoia condemning the repressive, discriminatory and authoritarian tendencies of the Italian State and demanding equality for minorities and further civil rights. The coinciding liberalization of the media market, putting an end to RAI’s monopoly, further defined this period as the prime moment for pirate radio, with the consequence of a libertarian fragmentation of youth culture, epitomised by punk.

One could argue that Giovanni, self-taught until the age of 24, inherited – in philosophy, politics and artistically – the most benign and affirmative traits of that period, diversifying his action in the context of a recently unified Europe, promoting improbable connections, exploring varied geographies, comfortably manoeuvring aesthetical fringes and making a commitment to live performance at its most liberating and engaging. Surprisingly, the path that lead him to that point had an unexpected detour: following his father’s consecutive assignments as a civil engineer he actually lived out his first decade in Africa – until he was five in Libya, from then until his eight anniversary in the Cameroons and until ten in Algeria. His far off native country was not synonymous with civil unrest as much as with opera, whose arias he would memorize with his siblings in order to practice the language and provide some family entertainment. The condition of expatriate had a strong influence in his education – he clearly remembers the calls of the muezzin, the sound of exotic musical instruments in local markets, the ritualistic expression music took in the streets of Yaoundé, or the songs he heard from his nanny in the Cameroons.

When he finally enrolled in music school – majoring in ‘jazz piano’- he further built on an encyclopedic technique; rhythm, harmony and tone are informed by non-western traditions yet equally sensitive to Debussy’s “Préludes”, Luciano Berio’s “Sequenzas”, to the ‘ambi-ideation’ heard in Borah Bergman’s Soul Note recordings, Cecil Taylor’s polissemic density, Paul Bley’s bruised transparency and of course, the most radical manifestations stemming from the underworld of pop music, invariably tied together by his own original praxis. A distinction – one would call it generational – he shares with many of the musicians he has crossed paths with recently, of which we could enumerate Nate Wooley, Chris Corsano, Arve Henriksen, Jim O’Rourke, Akira Sakata, Tetuzi Akiyama, Okkyung Lee, Yan Jun, Tony Allen,  John Edwards, Steve Noble, DJ Sniff, Terrie Ex, David Maranha, Manuel Mota,  Norberto Lobo, Peter Jacquemyn, Alexandra Grimal, or Toshimaru Nakamura. Di Domenico has founded his own label, Silent Water, home of an eclectic and occasionally unclassifiable production.

He lives in Brussels.