Musician, composer, curator and professor, Rogelio Sosa's artistic practice focuses on exploring the intersection of art, technology and music. His work seeks to eliminate rigidity of musical notation and concert halls through the use of experimentation. The result is a form of sound art composed of textures, layers, landscapes and frequencies expressed as liberating gestures. Through compositions, installations and performances he upholds the freedom and individualization of the artist in the midst of a society of oppression. 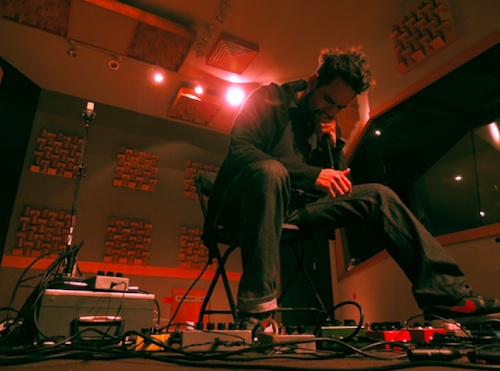 Through technology and the use of non-traditional instruments, Sosa ruptures paradigms that are in direct contrast to the conventional rules of composition. A sound scan which permanently expands the boundaries of its network of manifestation and feedback. A creative process that does not follow a line determined from the idea to the final sound, but an immanent form that thrives on direct invention and randomness during the process itself.

His most recent improvisations / performances are characterized by the expressive use of the voice as a vehicle for emotions and moods, generating noise and seeking empathy with the audience thanks to the recognizable language of the human voice. A malleable medium that emphasizes the spontaneity and uniqueness of each presentation. An open system of signification which holds a dialogue with the structures of the listener's acoustic reference such as music, noise, and gutterality of vocal gestures, as well as the structures of auditory reference: ring, height, duration and intensity, all of which is not possible to react to in a pre-codified manner or to advance a determined aesthetic result.