FELLESKASSEN is an artist duo established in 2014 and consists of Tonje Alice Madsen and Camilla Vatne Barratt-Due. They process themes through juxtapositioning individual expressions, each with their own background, Tonje from fine arts and Camilla from music and composition. Their first piece To be, to do (2015) is a silent movie performance and premiered at FASE Festival for sound art in Berlin 2015. The next piece Show more results (work in progress) will be premiered in December 2015, at Arts Santa Monica in Barcelona, as a part of the festival Eufonic Urba. 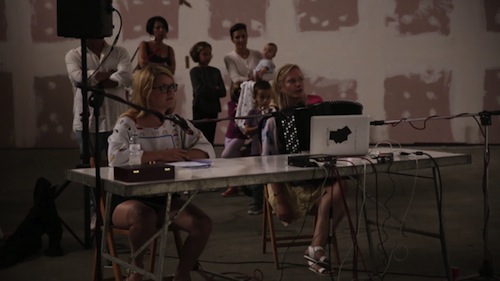 Tonje Alice Madsen (1983- Bodo, Norway). Lives and works in Oslo. She received an MA from the Department for Time Based Media at the Royal Danish Academy of Fine Arts in Copenhagen, in 2011. She works independently and collaborative, with documentary and narration, often based on varieties of found footage. Her videos have been shown at international film- and video art festivals and exhibitions, among them international Film Film Festival Rotterdam, lmages Festival, Toronto and Transmediale, Berlin. tonjealice.com

Camilla Vatne Barratt-Due (1984-Oslo, Norway). Lives and works in Berlin and Oslo. Performance artist, musician and composer, educated from The Royal Danish Academy of Music with classical accordeon as her main instrument. She is currently a student at MA program Sound Studies at The University of the Arts in Berlin. She works both with her own performances and as a composer for instrumental music. Her commissions holds a wide range, reaching from film, theatre- and dance performances around Europe and Scandinavia.  camillabarrattdue.com