EMS welcomes Marinos Koutsomichalis back! Marinos (Athens, 1981) is an artist and researcher. Via sound and a wide range of other media he interrogates the specifics of perception, technology and material and by means of a hypermedia, project­based and site­responsive methodology. 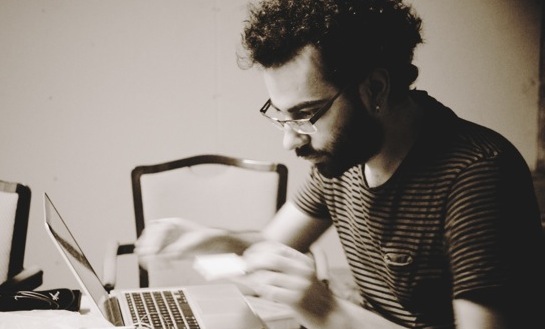 His work has been widely presented internationally in all sorts of milieus ranging from leading museums and acclaimed art festivals to industrial sites and from underground venues to churches or scientific conferences. He has worked as an artist in various institutions worldwide.

His academic career has hitherto involved a research fellowship in the University of Turin, a lectureship at the faculty of Music Technology and Acoustics of the Technical University of Crete, and leading Contemporary Music Research Center’s (CMRC­KSYME) course in Electronic Music and Sound Synthesis since. He is responsible for numerous publications in scientific journals/conferences, for numerous workshops/talks worldwide and for writing the Mapping and Visualization with SuperCollider book. He is a PhD candidate in Music, Sound and Media Art at the De Montfort University and he also holds a MA by research in composition with digital media from the University of York.